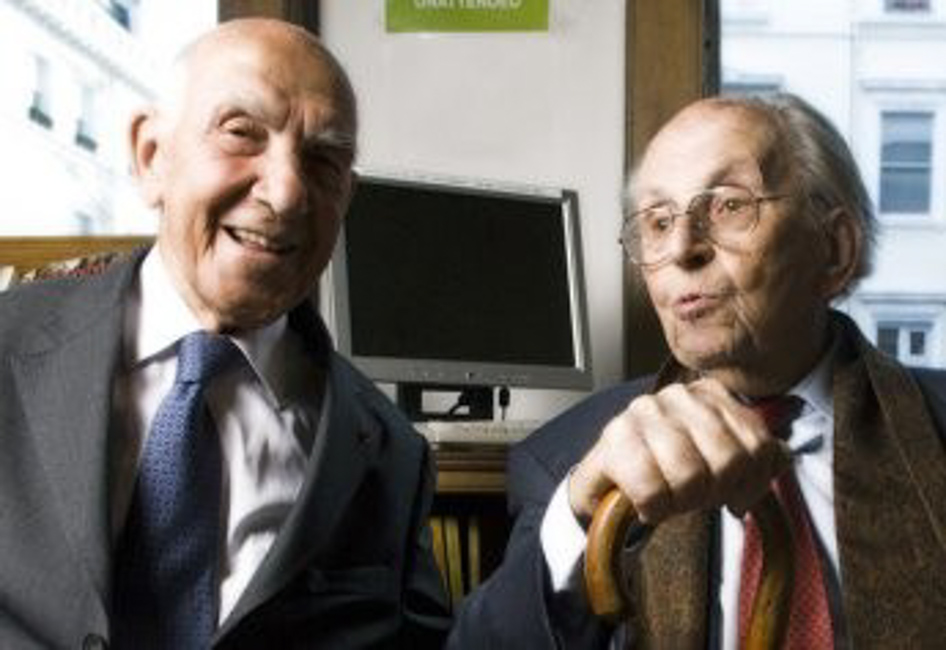 French Resistance heroes Stéphane Hessel (93) and Raymond Aubrac (96) were in London on the 18th of June to celebrate the 70th anniversary of General de Gaulle’s appeal on the BBC for the continuation of war against the Nazis. While the first one joined the General in London to keep on fighting alongside the French Free Army, the second one -who was played on screen by actor Daniel Auteuil in the film Lucie Aubrac- remained in France to create the Resistance movement Libération. Both men, who actively fought during the whole duration of the war, were tortured by the Gestapo and discovered first hand the horrors of the concentration camps: Stéphane Hessel as a prisoner, and Raymond Aubrac – who is of Jewish descent- because his parents and brother died in Auschwitz. Here, those two remarkable men talk to Chic-Londres about their incredible experience.

Did you hear Charles de Gaulle’s appeal on the BBC radio on June 18 and was it when you decided to join the Resistance?

Stéphane Hessel I had been captured by the Germans and was in a prisoners’ camp on that day so I actually didn’t hear the appeal. But after I escaped the following day, I was immediately told that there was a FArench general in London who had asked all French soldiers to rally under his command in London. The informations we had were very vague, and nobody had ever heard about de Gaulle, but the fact that there was someone willing to keep on fighting the Nazis was enough for me, and I immediately decided that I should joAin him in London. It took me six months to reach England, but I eventually did get there.

Raymond Aubrac I was still fighting against the Germans with the French army on that day, so I couldn’t hear the appeal either, and then I was made prisoner. So it wasn’t until I escaped the camp and arrived in Lyon in August 1940, that I heard about it. I first thought that his name was a pseudonym, as being called « de Gaulle » (“from Gaul”) seemed to good to be true! But I was moved by his optimistic message, and the fact that he was telling us that while France had lost a battle, we hadn’t lost the war yet. The concept of « Resistance » didn’t exist yet, but with my friends, we immediately decided that we needed to act, if not inLondon, then in France : it started with anti-German graffiti on walls, then leaflets, and then clandestine newspapers, with multiplied to reach 1,200 in 1941: I personally believe that the Resistance as a fighting movement started there, with the newspapers, because it forced us to get organised in order to print and distribute them: the fighting groups then took the names of the publications, as in the case of our newspaper Libération.

Which was your main motivation behind the decision to join the Resistance?

Stéphane Hessel When the French government signed the armistice with the Nazi invaders, a Frenchman could basically react in two ways: either by accepting the defeat, however sad it was, or by refusing to accept the situation. For me, the idea that we had lost was just unbearable so idecided to keep on fighting and joined the Free French Army led by de Gaulle in London.

Raymond Aubrac I totally disagreed with the new Vichy government: I couldn’t stand the fact that Pétain had abolished the Republican system and shaken Hitler’s hand, and that his regime promoted collaboration with the enemy and a policy of exclusion towards certain categories of people. Also, the idea to do something subversive only added to the appeal!

How have those years shaped up the rest of your life?

Stéphane Hessel I was 23 in 1940, so needless to say that those five years had a huge impact on me. This is a war that I experienced in many ways: as a simple soldier in 1939 and 1940 before the French army’s defeat, as a trainee in the Royal Air Force, as a Free French fighter working in the secret services in London, as a Resistance fighter in France, as a prisoner at the hands of the Gestapo and then as a prisoner in two concentration camps… Of this long and arduous adventure, something clearly emerged: the need to give a sense to my life by defending the values that the Nazis had scorned- which led me to become a diplomat immediately after the War and to join the United Nations, where I was involved in drafting the Universal Declaration of Human Rights in 1948.

Raymond Aubrac I am now 96, which means that those years barely represent 5% of my life, but they have shaped many of the decisions that I have taken ever since. Besides, I really thought that I was about to die when I was condemned to death by the Nazis in 1943, so the last 67 years have always appeared to me as a new lease of life and a bonus. And that certainly helped me to put aside the little worries of daily life to concentrate on what really matters.

Do you consider yourself a hero?

Stéphane Hessel Certainly not! I just consider myself lucky, in the sense that I have always had the feeling that I won this war, not only by fighting but also by escaping death so many times while remaining in relative good health. I have done my part, but I wouldn’t consider myself a hero: I would rather say I am a survivor…

Raymond Aubrac The word « hero » doesn’t mean anything to me. As far as Lucie and myself are concerned, one doesn’t decide to become a hero, but just starts by making small gestures, which later evolve into what has been called the Resistance.

What did you think of Charles de Gaulle the first time you met him?

Stéphane Hessel I was privileged enough to be invited to have lunch with him, his wife and a friend of mine in 1941 at The Connaught, where he was staying at the time. I was totally impressed by his kindness and politeness towards us, and thought more than ever that he was the man that France needed to get back its Republican values and system. He was extremely impressive, in all respects.

Raymond Aubrac When Lucie, our son and myself arrived in London on the 8 February 1944, after having escaped France, de Gaulle had already left for Algiers. While Lucie -who was pregnant at that time- remained in England, I left to join the Free French Army in Algeria, and this is where and when I finally met de Gaulle. I didn’t find him particularly warm, but he most certainly was a very impressive man.

Which are the strongest memories you keep of those years?

Stéphane Hessel I have very fond memories of the nine months I spent training in the Royal Air Force, followed by the two years when I lived in London : the way the English people behaved towards us was simply marvellous, as they treated us with an unforgettable generosity, kindness and warmth. I was also very impressed by the Londoners’ spirit of survival and fortitude , despite the fact that one could die at any time under the bombs. Obviously, I also remember the day I was arrested by the Gestapo in Paris in 1944 -while on a secret mission there- and the monththat I spent being interrogated in its headquarters. Thankfully, those memories have faded, but what remains strongly in my mind is the determination I had back then not to betray my comrades. What I find hard is that while I trully believe and hope that I didn’t put any of my friends’ lives in danger, it is not possible to ever be completely sure of what one said under torture.

Raymond Aubrac My arrest on 21 June 1943 by the Gestapo was certainly a shock, but not a total shock, as we always expected as Resistance fighters that such a thing might happen. The week I spent being questioned by the Nazis was very hard and I must say that if I had had a cyanide pill hidden on me at night, knowing I would be interrogated again the day after, I probably wouldn’t be talking to you today. That said, even after I was told that I would be executed, I somehow remained hopeful, as I knew that my wife Lucie wouldn’t forget her man. She just loved a good fight, and she organised my escape with amazing creativity and courage. I got shot behind the ear on that day but I was so glad to be free that I didn’t even feel the bullet!

What did this experience teach you about human nature?

Stéphane Hessel During the time I spent in concentration camps, first in Buchenwald then in Dora, I was particularly shocked by the degree of brutality displayed by the prisoners who had been chosen as assistants by the SS, and how some men who had never been violent until then could treat others with such cruelty. But I was equally amazed but the degree of solidarity that I found within my fellow prisoners, and the will we had to survive together.

Raymond Aubrac One thing I learnt is that men are built in such a way that they can adapt to anything in order to survive. While it is true that one can easily get used to the high life, it is equally true that anyone can get used to prison and hardship, which says a lot about the human capacity of survival. I have also learnt that camaraderie is essential: I was in contact with other Resistance fighters whom I barely knew, and yet we felt like brothers, as we depended so much on each other to survive. And while we got used to live with constant fear, we also lived with hope, and in a way, I see our experience in the Resistance as a beautiful testimony to optimism…

To see the fantastic program of events and films set up by the French Institute to celebrate this anniversary, go to www.institut-francais.org.uk