The London-based artist and architect, born in Israel in 1951, is without a doubt one of the most influential designers of our time, whose creations -from unique pieces of sculpture to everyday objects such as the iconic Bookworm shelves (1993) and Tom Vac chair (1997)- have already become modern classics.Here, he talks exclusively to Chic-Londres about some of his favourite places in London.

What is your earliest London memory and what were your first impressions of the city? I came to London in 1973 as a student. At that time, my only knowledge of the city came from British films, such as Blow Up, Saturday Night and Sunday Morning or Morgan, and as a result I pictured it as a very exotic place… So it was quite strange for me to come and discover that there were ordinary workers in London and not the glamorous blondes constructed by movie directors.

Where do you live and why? I live in Belsize Park, where I have lived since the Seventies. I like the familiarity of the area and would never consider moving south of the river: for me that would be like moving abroad. I also love the fact that North West London seems more cosmopolitan and relaxed than places like Chelsea or Kensington which, from a Northwest Londoner point of view, appear more snobbish and prone to classism.

What do you miss most when you are not in London? I miss my studio in Camden, which represents what is most familiar to me, and I miss the language. I have wonderful friends in places like Spain and Italy, but I always enjoy coming back to a language that I don’t have to speak slowly.

How would you describe London in three words? Big. Rich. Poor.

What makes London unique? The way in which the exotic and the rest of the world come to you. For example in Belsize Park, there is this incredible Anglican church, which is now used by the Ethiopian Orthodox Church. They have the most amazing celebrations every Sunday, which can last until 3 in the morning, where everyone is really nice and friendly. That wouldn’t really happen in many other cities.

What is your favourite area of London? North West London, because this is where I live and where most of my friends live, and because it has got fantastic parks. But I also love visiting the East End, which still has an exotic mix of poor and rich and real subcultures that survive.

Favourite park? Hampstead Heath, where I used to go quite often in the past, because it has so many different aspects, such as Parliament Hill, the Ponds, Golders Hill Park… Now, my favourite park is my garden, even though I am not at all a gardener.

Favourite restaurant? A lot of Italians came to live in London in the fifties and as a result, the city has got many really good Italian restaurants. But my favourite has got to be Casa Manzi: I have a table reserved for lunch there every day and the owner even named a dish after me!

Favourite places to shop? I am not much of a shopper but I enjoy buying my vegetables in my local store in Belsize Square and I love Camden Lock for the second hand clothes.

What is the best place to party in London? Home… The Paramount club, situated the top of Centre Point, near Tottenham Court Road, has a great 360 degrees view over Central London, which  it gives a new prospective on the city.

Best London memory? It could be the opening of my studio eighteen years ago, because it took us a long time to build it, because it is hidden away and because it is an architectural rendering of my work.

What is London best kept secret? Highgate cemetery, because you can go there and visit all kinds of people, from Karl Marx to Douglas Adams. Personally, I think the best is to go there when you are not allowed and jump over the wall. I haven’t done it for a few years but I used to do it a lot in my time. Don’t tell anyone! 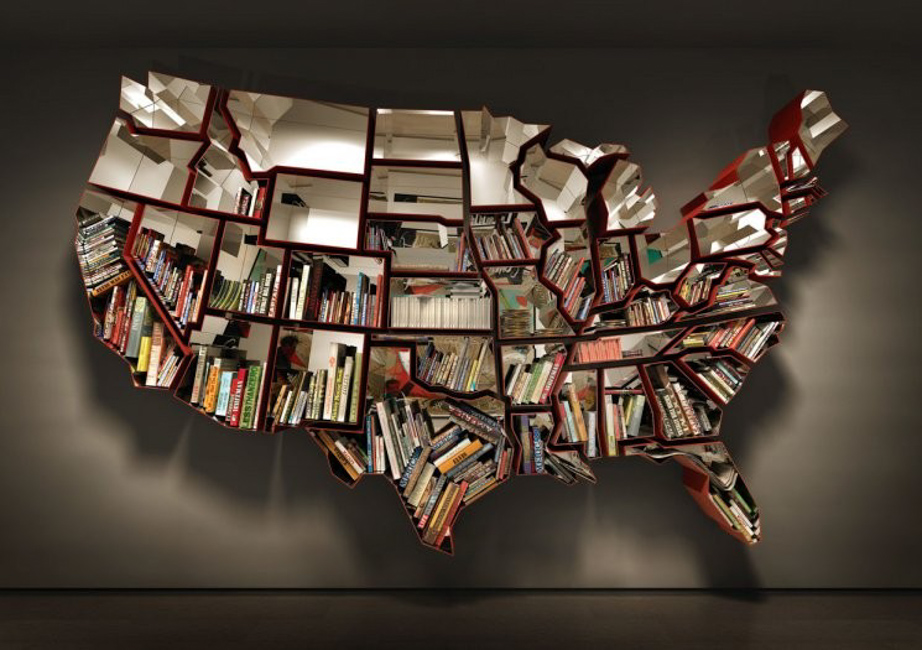 Oh, the farmer & the cowman should be friends, a shelving unit in the shape of the USA, currently shown at the MoMa