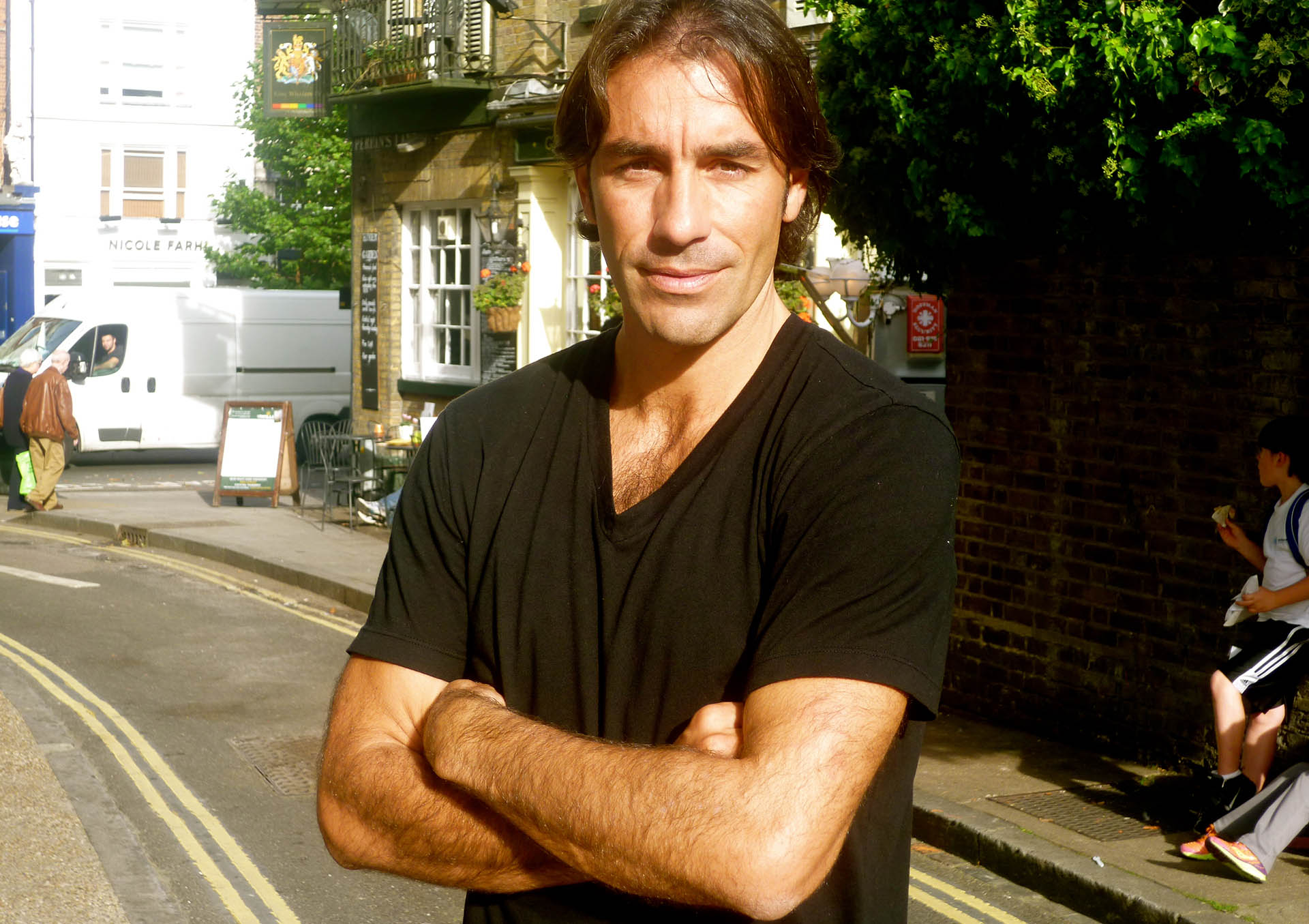 To Arsenal fans, he’s a legend: the man who won three FA Cups and two FA Premier League titles, and was voted one of the club’s greatest players in History. To his fellow Frenchmen, he’s a hero, having won both the 1998 FIFA World Cup and UEFA Euro 2000, two of the greatest moments in Gallic football history. And to anyone who gets to meet him, he’s one of the nicest men in sport: friendly, humble and approachable -not to mention easy on the eye- which has earned him legions of fans, both male and female. And while Robert Pirès (40) officially retired from competitive football two years ago, the Reims-born, London-based champion is still busy. The father of three (Naïa, Theo and Alessio, respectively 7,5 and 2) has not only become an ambassador for Arsenal, he is also a prolific charity worker: as ambassador of Grassroots Soccer, an association who helps fighting HIV in South Africa, and as patron of Le Rêve de Clara, his wife Jessica’s charity that helps deprived children from the Indian Ocean countries. Here, Robert Pirès reveals to Chic-Londres his favourite addresses in London.

What is your earliest London memory and what were your first impressions of the city? I first arrived in July 2000 and was struck by how respectful drivers were towards pedestrians- a very different experience from Paris, which shows how much more relaxed Londoners tend to be.

Where do you live and why? I’ve lived in Hampstead since 2002, after two years in Marylebone. I love Hampstead because it looks and feels like a village, yet offers the best choice in terms of shops, restaurants, parks and schools. Its’ like living in the countryside, while being at the same time in a big city.

How do you describe London in three words? Multicultural, trendy and tolerant.

What do you miss most when you’re not in London? It always surprises people when I say that, but I miss its quality of life: the atmosphere is more relaxed than in Paris and I can find all the nice French products that I love. Plus if I really want to go back, it’s only two hours away by Eurostar. As for the weather, it’s no worse than Paris: I believe the fog is a myth!

What do you think makes London special? Its spirit and diversity: it’s just full of energy and really mixed. Everyone can lead the life they want without being judged, which makes it really great.

If you could make a wish, what you would change in London? Humps on the roads. There are so many of them and they’re enormous! Which I find strange, as people here tend to drive quite slowly anyway…

What are your favourite shops? Waitrose for food, Gap for kids clothes and Harrods for the rest.

What is your favourite park? Regent’s Park, because of the zoo: a definite advantage when you’ve got kids.

What are your favourite restaurants in London? Nozumi, followed by Momo’s, Zuma and L’Atelier de Robuchon.

Which private club do you belong to and why? I’m a member of The Arts Club. The food there is great and the club downstairs  really good fun: I like the fact that there are often live gigs and that the atmosphere is so intimate.

What is London best kept secret? Little Venice, which is really such a pretty place.