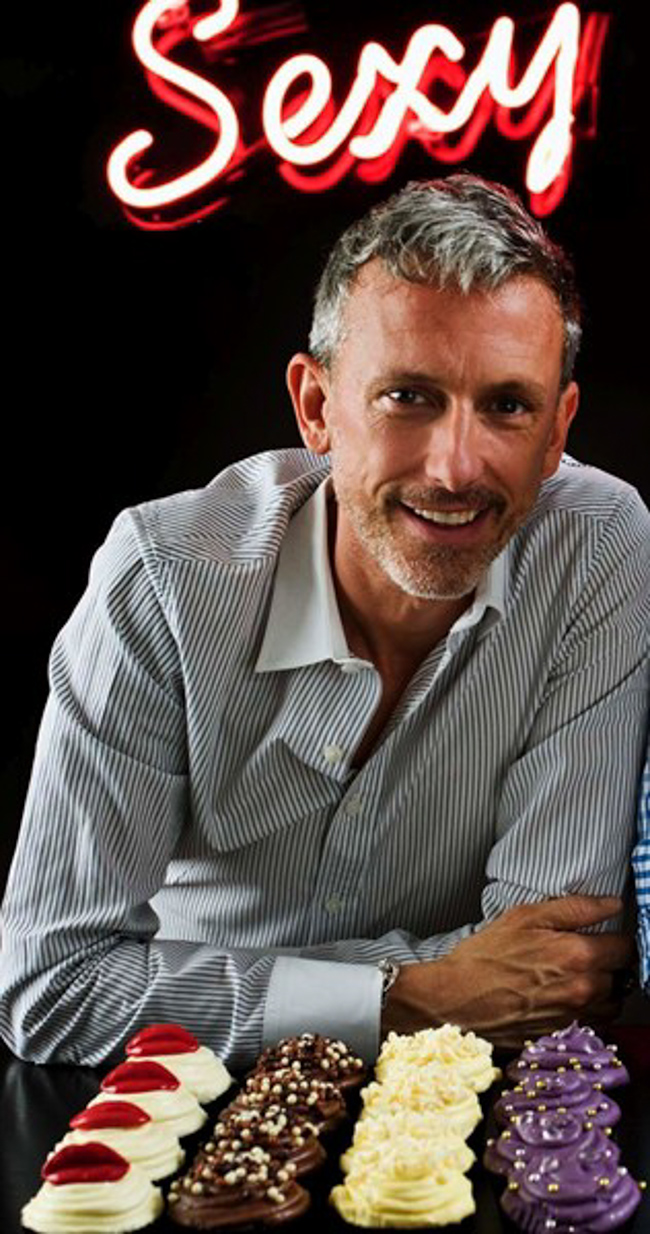 Canadian Patrick Cox (47) has made his name by designing shoes for Elton John and Madonna, and by launching the bestselling Wannabes in the mid-90s, a collection of loafers so successful that they inspired the title of The Spice Girls’ first single. But nowadays, Elizabeth Hurley’s best friend gets much more excited by cupcakes than shoes, after opening last September in Soho his first pastry shop in collaboration with French chef Eric Lanlard. Deliciously raunchy, with its black and neon decor and its “titty cakes”, Cox Cookies and Cake (pun intended) has injected a serious dose of sex appeal to the normally tame world of cupcakes. Here, the designer turned shop owner talks to Chic-Londres about his favourite addresses in London, and this encounter with Lady Gaga in Elton John’s kitchen at 3 in the morning.

What is your earliest London memory and what were your first impressions of the city? I used to live in Africa as a child, so like most expats, I would always come to London in summer with my parents to escape the heat, and because my father’s family originally came from the East End. My first memories date back to 1972, when I was a little boy. I remember seeing all those girls with crazy platform shoes, as well as waving at the Queen, whom I saw in her car driving through a park. So I obviously developed a love of shoes and of the monarchy at a young age.

Where do you live in London and why? For 17 years after arriving in London in 1983, I hired a flat in Notting Hill. But I had always dreamt of having my own front door but couldn’t afford a house there, I decided to move top Maida Vale. I thought at first that it was very suburban and thought I might have made a terrible mistake. But I actually really like it here now, because it is very discreet and suits my lifestyle. Notting Hill is too much of a live show and I don’t want to feel like I have to dress up just to go and buy my bread.

What do you miss most when you are not in London? I miss the people, which are the reason why I live here. You don’t live in London for the weather or for the cheap prices, but because it is the most international place in the world, that offers such a great mix. By comparison to multicultural London, Paris seems small and provincial, and obsessed with being French instead of embracing the world, while New York is still swallowed by American culture.

How would you describe London in three words? I would say international, historical and modern. I like the fact that England still maintains traditions like the Queen, while being at the same time so forward, for example in music -England has such a big voice musically, not only in pop but also in hip hop, with black music finding its own voice, through young talents like Tinie Tempah.

If you could make a wish, what you would change in London? The weather! Our last three winters have been brutal and our last three summers inexistent, so it would be nice to have a little less rain and a weather which is a bit less miserable.

What are your favourite shops here? I love obscure Japanese labels so am particularly fond of Dover Street Market, which is the best place to find those. I have also been a regular visitor to Alfies Antique Market since I moved to London, as I used to buy late Victorian pieces and now collect Italian glass objects. Harrods remains quite special to me: I used to sell my various collections in five different floors there and my mum always wants to visit when she comes to London. I have recently been appointed ambassador to their new pet spa with my bulldog Caesar and we are also launching Cox Cookies & Cake there in June, which I am very happy about….

What is your favourite place to walk? I love to walk with my dog along the Regents Canal, from Little Venice through the zoo and Regent’s Park. It is such a secret place, and surprisingly quiet.

What are your favourite places to eat out? Randall & Aubin is my canteen, and a true Soho institution: I love it because I can look at my shop while eating as it is just across the street and this is the place where I have discovered oysters, plus there are always some cute boys and pounding music. Generally speaking, Soho has become a real foodie place, with restaurants increasingly replacing sex shops. I always eat out and tend to go back to El Camino, Bocca di Lupo, The Wolseley, Zuma, Nobu and Scott’s, which is to me the most elegant power restaurant in London.

Do you belong to any private club? No. I am not a big drinker and don’t really like to go to pubs or bars. I am a speedy person, so when I go to a place, I like to eat and leave- after one hour and a half maximum, I am ready to leave.

Best place to party in London? My living room- it looks like a disco and has a great sound system.

What is your most memorable night out? There have been many, but if I must single one out, then I will have to say Elton John’s Tiara Ball last year. At 3am, Elton called me on my mobile while I was on the dance floor to tell me I absolutely had to come to the kitchen, where I found him with Lady Gaga dressed in a studded leather bikini and huge platforms cooking pasta. She had performed earlier on for the 300 guests and was hungry and as the staff had already left, she decided -as the true Italian she is- to make her own meal. It was so camp, cool and hilarious, even Elton was excited!

Where do you go when you want to relax? I go to Liz Hurley’s house in Gloucestershire, which is only 50 minutes away from Paddington by train, so I can go there just for lunch, although I will usually go for a few days. She has got five dogs so Caesar has got company to run around, while we sit and talk in the kitchen. Liz is very focused and business orientated so she is a good influence for me, as well as a great friend.

What is London best kept secret? I think Soho, while being a touristy neighbourhood, is still quite neglected by Londoners, because of its seedy image, despite the fact it goes from strength to strength. New York club The Box will be opening a branch here very soon, which should bring the society kids to this part of town.

Pictures below: Patrick and his business partner Eric Lanlard in their shop and some of Cox Cookies and Cake’s creations 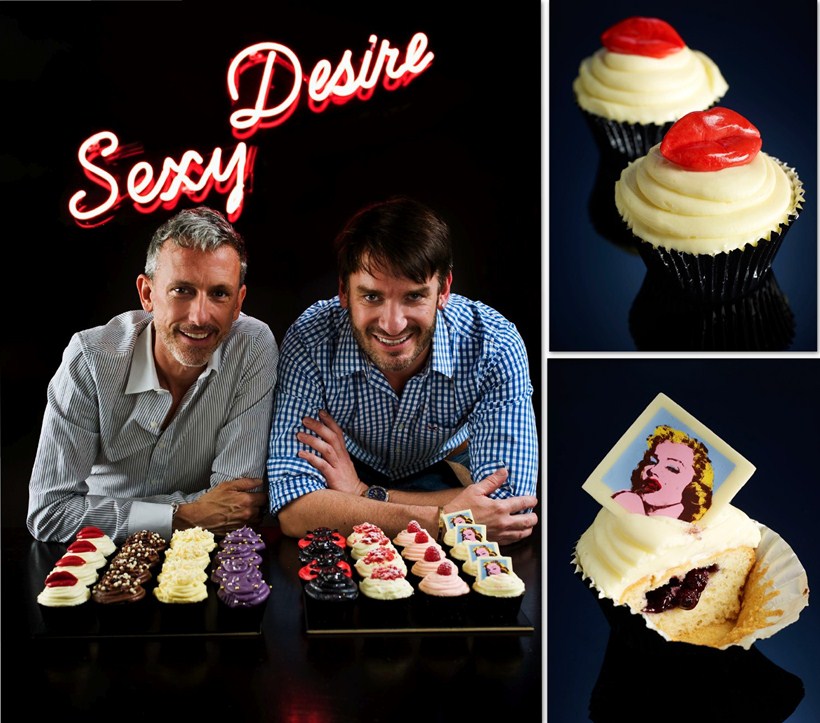