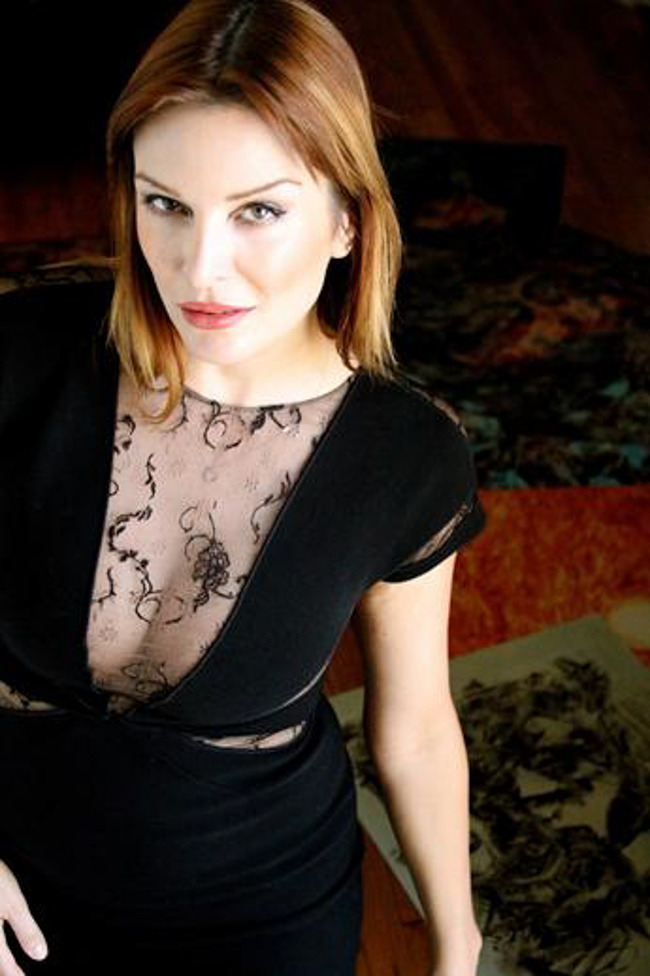 Discovered by British Vogue’s booking editor aged 15, British model Catalina Guirado (37) has appeared in top fashion magazines like Vogue and Elle, walked runway shows for Vivienne Westwood and fronted campaigns for L’Oréal, amongst others. Nowadays, she might be mostly known as a reality TV personality and lads’ mags favourite -having been voted four times by FHM as one of the 100 sexiest women in the world- but there is much more to her than meets the eye. An exceptionally talented violonist, she had performed at the prestigious Royal Festival Hall and Royal Albert Hall by the time she was 11, which led her to win a scholarship at the Guildhall School of Music and Drama and to become a signed music composer for Universal. She has now added a new string to her bow, as art curator to the collection of her late father, acclaimed essentialist Spanish painter Juan Antonio Guirado, who passed away in 2010. Here, Catalina, who divides her time between London and Los Angeles, gives Chic-Londres her favourite addresses in the British capital… and answers a few more personal questions.

What is your earliest London memory and what were your first impressions of the city? I lived in Hampstead as a child and remember going for picnic in the Heath by the ponds when I was four- I absolutely loved it there, and was very sad when we moved to Clerkenwell later on, because it looked so grey in comparison.

Where do you live in London? I live in Ealing now, near the golf course. There are country lanes and fields and I am surrounded by trees, which makes mehappy! Plus there are stables only twenty minutes away, which is great as I love horse riding.

What do you miss most when you are not here? When I am in LA, I really miss the British sense of humour, the culture and the fantastic social scene there is here, which you don’t find in California. In London, every place you go has got a special buzz and a vibrant feel, with something exciting to do every night.

How would you describe London in three words? Fabulous, fun, parties!

If you could make a wish, what you would change in London? I would change the weather, obviously, and I would diminish the number of tourists there are in Central London right now- there should be at least ten more platforms on the Tube to accommodate everyone!

What is your favourite district? At the moment, I really do like to go to the East End, as it is super trendy and cool, and everything seems a bit quirky and different.

What are your favourite shops? I love Topshop as well as H&M, Zara and Next- I would have never thought that I would say such a thing, but Next really has some nice stuff now. As for designer clothes, I buy them on eBay.

What are your favourite places to eat out and have fun? I love The Kent, a pub in Ealing which has the best food, a huge beer garden and a great atmosphere. I also really like the fact that I have to walk through a field to get there! I don’t really like trendy restaurants and prefer trusted places like The Embassy, my favourite. To have a drink, I love The Electric private members’ bar and Shoreditch House. I don’t go to clubs, but always have the best time on the Roof Terrace Bar at the Sanctum Hotel, where I have spent many fun nights with my friends. They even have a Jacuzzi there, which adds to the party atmosphere- although I don’t want to think about what must have happened in there!

Where do you go when you want to relax? Home.

What are your most memorable nights in London? The ones I don’t remember!

Do you enjoy being an art curator? I inherited an estate and am learning about this business. I love art and paint myself but am discovering that there is a lot of snobbery about the way things are done in this world. I am obviously coming at it in a maverick way and hope to shake it up a bit!

You publicly said that your father abandoned you as a child. Does it feel like you are reconnecting through his art? He said that he never abandoned me, but that is how it felt to me when he left home when I was seven and had no contact with me for the following 13 years. But in a strange way, I now feel closer to him in death than I did when he was alive, by learning about his life and work through articles in the press. I never knew before how well known and respected his work was in Spain and have discovered that I am very similar to him in many ways- I am not sure this is a good thing but that is interesting!

You were a very talented young musician: do you sometime regret not to have pursued this career? Not at all- I was considered as a bit of a prodigy and played the Albert Hall when I was 11, but I burnt out quite early because I felt I was being pushed too much by my mother. When I started thinking a bit more by myself, I realised I actually wanted to become a fashion journalist, but when I went to Vogue to get some work experience, they decided to book me as a model and that’s how I started my career. I then had so much fun, travelling around and hanging out with rock bands, that I never looked back. But classical music did give me an important grounding, and some credibility as a composer with Universal Music. And while I don’t play the violin for fun, I still love playing tracks alongside my husband, musician Matt Cheadle.

As a model, TV presenter and reality shows participant, your life has been very much in the public eye. How do you feel about that? One of the reasons I moved to LA and put myself in self exile is because I felt really pigeon holed in England. I have many artistic sides to me, but no matter how hard I tried to prove myself to the public and the industry, the only thing that the press ever seemed interested in was who I was dating at the time. Of course, it isvery flattering to feature in magazines like FHM and Maxim as “one of the sexiest women” and being a London “It girl” was lots of fun at the time. But one grows up and has to move on. At the end, you just have to do something different or you run out of gas.